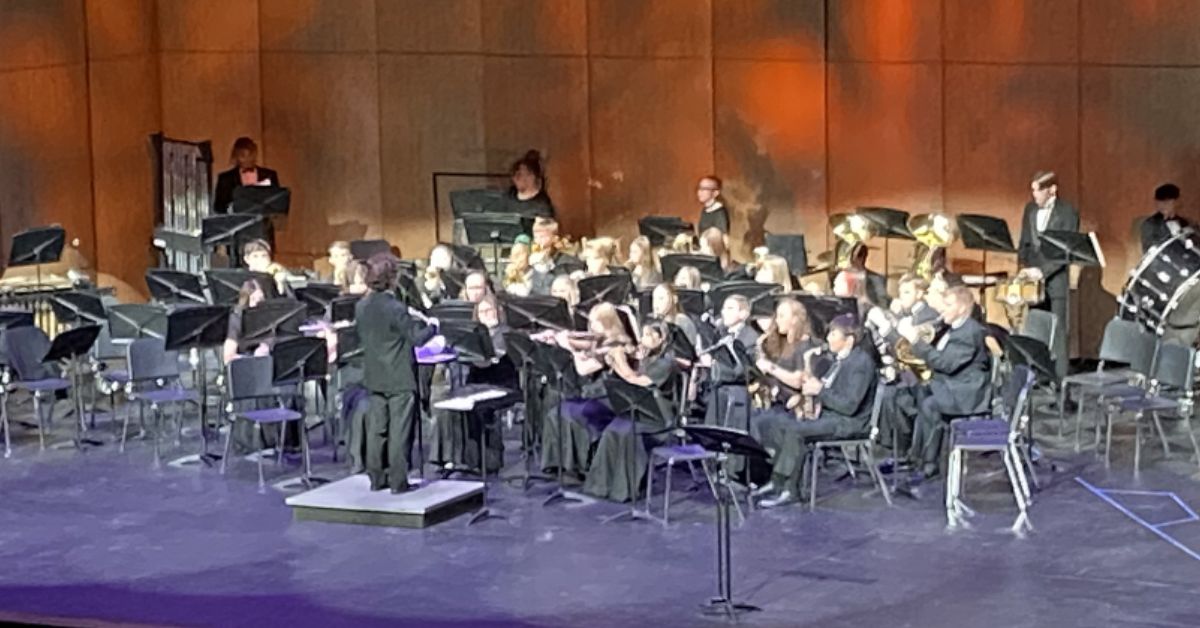 The La Porte High School (LPHS) musical groups had their first concerts of the year after practicing since the beginning of the school year. The LPHS Orchestra performed on Wednesday the 12th, and the LPHS Band performed the following night on the 13th. Both groups performed well, and the Performing Arts Center was filled with students, parents, and all sorts of music fans in La Porte.

Orchestra performed “Symphony No. 1” by Johannes Brahms, “Symphony No. 6” by Pyotr Ilyich Tchaikovsky, and “Toreador Song” from the opera “Carmen” composed by Georges Bizet.

“I felt pretty good about how we performed. Concerts are always a lot of fun for the musicians and audience members,” Hunter Quadlin, musician, said.

LPHS Key Club students are embracing the fall spirit and want to share this joy with others. Key Club is an international, student-led organization that gives its members opportunities to provide service, build character, and develop leadership.

These students have been organizing a Halloween event for Critchfield Elementary and Paul F Boston Middle School. This will be an afterschool event from 3 p.m. to 5:15 p.m. All kids are invited.

The Halloween event will be held on two separate days; at Boston Middle School on Wednesday, October 26, and at Critchfield on Thursday, October 27. Children can participate in a scavenger hunt, Ghost Boo-wling, a cake walk, and cookie decorating.

“I love having fun with the kids and bringing them the joy of the season. Plus, I love being festive,” Key Club Member Michael Pham said.

Members who are attending the event are asked to wear their Key Club shirt or a festive costume.

Key Club volunteers are asked to stay after until 5:45 p.m. to help with clean up and tear down. They are also responsible for rides to and from the schools.

John Sherrick is a chemistry teacher at LPHS who has been teaching the study of wonder, magic, and fun for 28 years. He graduated from Wabash College and has been at LPHS ever since.

Sherrick originally went to college knowing that he wanted to be a teacher, but he was not sure what he wanted to teach. He was stuck between music, history, and chemistry. Wabash College didn’t offer music studies, and between history and chemistry, he decided that chemistry was more interesting.

“As a senior in high school, I gave music lessons to younger students and found it to be immensely satisfying and rewarding. It was at that point that I realized I wanted to teach others for my career choice,” Sherrick said.

Sherrick not only teaches the wonders of chemistry but life lessons and other intangibles for the future. He likes to utilize multiple strategies of teaching to make sure every student can be included in the chemistry and science world.

“I call chemistry the study of ‘wonder and magic, and fun.’ There can be so many enjoyable facets in chemistry, from mesmerizing demonstrations to exciting experimentation, that make it such a pleasure to teach,” Sherrick said.

Outside of school, Sherrick enjoys outdoor activities like biking, camping, and hiking, and indoor activities like reading and various types of cardiovascular exercises. As a child, he used to play the drum set. He hopes to one day regain the talent and passion for it again.

Gartland is a leader for FCA and plans the locations, speakers, and activities for the club’s meetings.

“I love seeing a group of 30 or more high school students get together on a Monday night to worship God,” Gartland said.

She is also a cheerleader for LPHS. Gartland has cheered for all four years of high school and loves to stunt and cheer under the Friday night lights. Gartland also tried tennis last year and loved the environment.

“I will miss the people on my cheer team so much,” Gartland said. “Though we have had our ups and downs, we have also had so many laughs. I wouldn’t trade this team for the world.”

Outside of cheerleading, Gartland loves to sing and hang out with her family and friends.

Gartland is looking to major in something related to business. She is leaning towards Personal Finance or Marketing. Though she is still applying for college, she is hoping to get accepted into Butler University or Indiana University Bloomington.

She is excited for the new experiences, opportunities, and people that she is going to meet. She is scared of the change, but she feels that this is something she needs to succeed in her future.

Gartland never believed people when they said how fast high school goes by, but now that it is over, she says she wishes she had lived in the moment more.

“If I could tell an incoming freshman something about high school, it would be to not stress too much,” she said. “It will be overwhelming at some points, but just do your best. Also, a bad grade on an assignment is not the end of the world.”