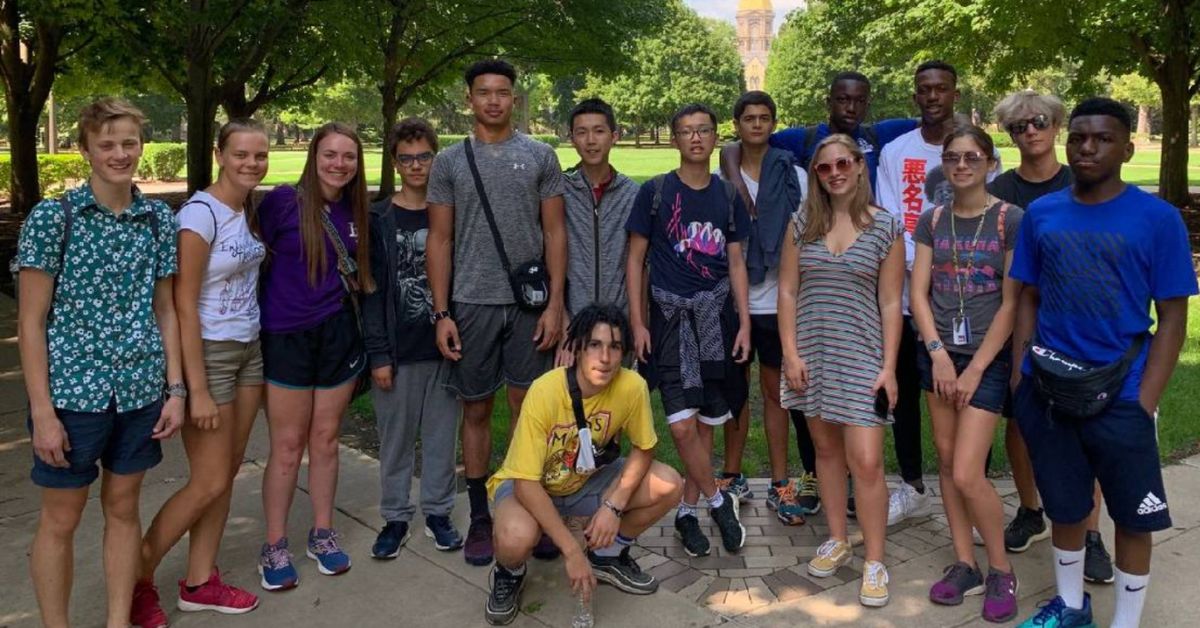 Directly across from Lake La Lumiere, construction of The Forum started in early July. As a tribute to honor long-time La Lumiere community members Bryan and Judy Smith, The Forum is a flexible space for the community that can host many different events such as Fine Arts Friday, serve as an outdoor classroom, watch a production from the La Lu Players, or a spot to find some peace and quiet during a free period.

The Smiths said, “We chose this project, believing that it would be a wonderful gathering place for faculty, students, and staff for years to come. And both would definitely bring out the full potential of the natural beauty in the area along Lake La Lumiere.”

Roughly 40% of the construction has been completed, most of which has involved earthwork and appropriate drainage in the area to ensure that The Forum will serve the school long into the future.

Completion is primarily dependent on confirming that we have routed the groundwater away from the foundation of the stone and concrete and into our lake. If all goes according to plan it is foreseen that the space will be ready for use this Fall.

Brian Tonino, Director of Advancement and Boys’ Basketball Coach, says, “We feel that place-based learning is a critical component of a La Lumiere education, and perhaps our greatest asset as a school is the lake. We wanted to create a space that drew the focus on campus back to the water. Bryan was our beloved Biology Teacher, and Judy among her other roles captured so many pictures of the campus and cared for the rivulet which runs adjacent to what will be the Forum.

Ultimately, we felt that the combination of their interests really fit this project well, and naming it in their honor was the least we could do to recognize their tremendous commitment to our school.”

The Forum was funded thanks to the generosity of the La Lumiere community. The renderings of the plan were announced during last year's Alumni and Parents weekend and an anonymous donor pledged a generous matching gift to encourage others to contribute to the project. It was a wonderful success and a testament to the culture of philanthropy we have at La Lumiere.

As summer comes to an end, La Lumiere is thrilled about the return of students to campus.

Preparations include New International Student Orientation, prefects meeting to discuss plans for the new school year, and the planning of one of the most beloved traditions at La Lumiere, Orientation week.

New Student International Orientation occurs a few days before the first official day of school, allowing international students to come to campus a little bit earlier and helping them feel more comfortable before the school year rolls around. They have the chance to be able to hang out with fellow international students, take trips off campus to explore the area and meet their new teachers and dorm parents.

Rising senior, Dana Mulco says, “Being a fourteen-year-old girl, I did not know what to expect as a stranger in a new place. Attending the New Student International Orientation, I had the opportunity to familiarize myself with the place where I will spend the next four years. I met new students who were nervous just like me, but we became friends and became more comfortable in the new environment. The orientation allowed me to meet new people with whom I could share the experience of being abroad and develop friendships which facilitated the transition to a new school in a new country.”

Following the end of New Student International Orientation, Sunday, August 14, is the official start of the new school year. To kick off the school year, La Lu begins with Orientation Week.

Orientation week takes place for the first week of school, where school days last from 8:00 A.M to around 8:30 P.M. From sports practices to ice breakers to Head’s Cup competitions, Orientation week is packed with activities for students allowing them to catch up with one another and lets new students spend some time with the student body, helping familiarize them with the campus. There are mini classes to provide students with an introduction to their teachers and courses, discussions held about the summer reading, and even a party at the end of the week held on the La Lu beach on the lake!

Orientation week also kicks off the Head’s Cup competition. At the start of the school year, students are sorted into four teams, each name after the first four headmasters of La Lumiere.

Throughout the school year, there are various games held to try and rack up as many points as possible for your team. Whether it is seeing which Head’s Cup team can have the most members dress up for Spirit Week or a Flag Football game, La Lu students go all out for these competitions. During Orientation week there are games of Jeopardy being played, scavenger hunts, and very intense rounds of Rock, Paper, Scissors!

Orientation week may be the busiest and most exhausting time of the school year, La Lumiere students cannot get enough of it!

Jay Blakely, the Assistant Director of Admissions at La Lumiere, recently joined the team in the spring of 2022. He earned his B.A. in Sociology from Bethel University and is pursuing his M.A. in Higher Education Administration at Grand Canyon University. Formerly at Bethel University, Blakely was a student ambassador, tour guide, overnight host, and admissions data & retention intern.

Blakely has found La Lu to truly be a very special place with a close community and breathtaking campus. As a part of the Admissions team, Blakely was blown away by the many traditions La Lu has that give their students the opportunity to shine. Although he has been here for a short period of time, Blakely has discovered his place at La Lu. He is so happy to have joined the La Lumiere team and help facilitate more children coming to explore what La Lu is about!