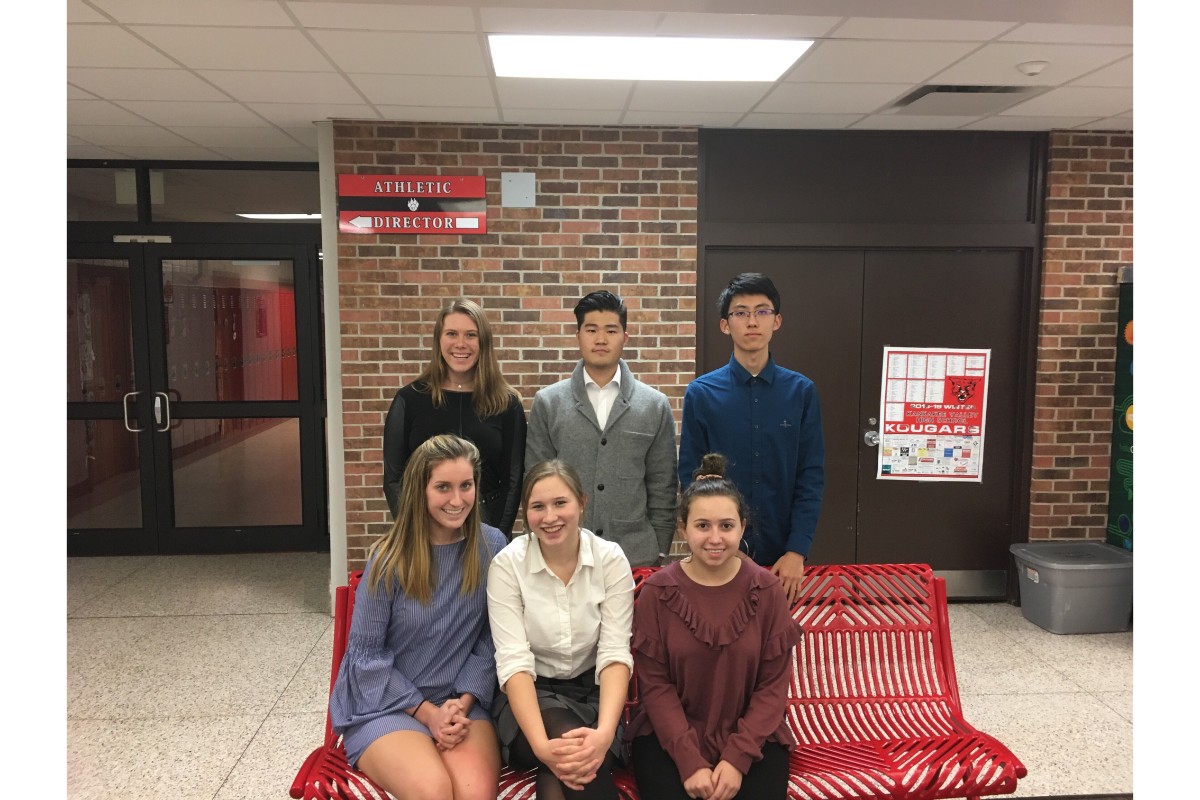 On Saturday December 1, La Lumiere’s Academic Decathlon team traveled to Kankakee Valley High School in Wheatfield, Indiana for their first competition of the year. Six La Lu students attended the invitational and competed in ten events. The topic which these students have been diligently studying is the 1960s in the USA. Students took timed multiple choice tests in math, science, social science, economics, literature, art, and music in addition to writing an essay, giving a speech, and having an interview. What these students do is nothing short of impressive.

The team is proud of this great start to the season, but still has a lot of work to do before their regional competition in January.

Elaine Jensen is a senior this year at La Lumiere, and hales from La Porte. Elaine is outgoing, funny, kind, intelligent, and strong. She loves studying history and politics. After high school, Elaine is likely to attend the The Citadel, The Military College of South Carolina, where she will major in Political Science and Intelligence with a focus in Counter Terrorism. In addition, she will join their ROTC program for the Marine Corps. After college, Elaine aspires to become an Infantry Officer with the Marines.

Elaine attended Wheeler Middle School prior to La Lumiere. When looking for a high school, Elaine knew she wanted to go to a smaller, more challenging school. When she shadowed La Lu, she knew immediately that this was where she belonged.

“I knew it was the right fit," she said. "I did not even apply to any other high schools.”

The community and welcoming environment are Elaine’s favorite parts of the La Lu experience.

“The welcoming environment that is La Lu helped me embrace who I am and grow into the confident person I am today.”

Elaine is the captain of La Lumiere’s crew team, a member of the Academic Decathlon Team, as well as the President of the La Porte County High School Republicans Club. This past election cycle, Elaine helped campaign for the Indiana Senatorial Race.

Elaine loves living here in Northwest Indiana, because it offers her the small-town feel while still being near the city and the lake. She loves the change in seasons and has oftentimes said that La Porte is a great place to live. Elaine is definitely going to be an unstoppable force in the future, and we can’t wait to see what she’ll achieve!

Mr. Enrique Galvan-Anderson is in his second year at La Lu and has definitely made it his home. The Wisconsin native is no stranger to the boarding school life, having gone to a boarding school during high school himself. After graduating high school, Galvan-Anderson attended Loyola University in New Orleans. He now teaches Literature and Composition to La Lu sophomores, and a writing course for upperclassmen called Writing About Film.

When asked why he became a teacher, Galvan-Anderson responded, “I loved English and Film, and I wanted to be able to teach that to other students.”

Galvan-Anderson describes himself as a social person and says that being able to talk to students and collaborate with other teachers is his favorite part of the job. In addition, Galvan-Anderson loves seeing the light bulb come on above a student's head when they finally begin to understand something.

Before coming to La Lu, he taught for a year at a school in Chicago. He loves the community feel at La Lu.

“I love to talk to the students and the teachers. Everyone is just so nice and friendly here.”

Overall, Mr. Galvan-Anderson’s love for English and Film inspires his students every day.

Every year here at La Lu, we get into the Holiday spirit in many ways. Students, teachers, and families alike participate in a number of festive events during the Christmas season. One of the La Lu community’s favorites is the Christmas Concert. The music ensembles as well as a few soloists perform a set list of holiday hits. It is always an impressive show of the talent and Christmas spirit that our students have.

In addition to the Christmas Concert, the Academic Decathlon Team hosts a toy drive for the Marine Corps’ Toys For Tots. The drive gives Lakers and the extended community a great chance to give back during the Christmas season.

Yet another way La Lu celebrates the season is with the annual Christmas Dinner. Christmas Dinner is for faculty, their families, and the La Lu boarding community. Over a nice sit-down dinner, students get to celebrate the holiday with their second family: their La Lu family.

Overall, Lakers have no shortage of Christmas Spirit this Holiday Season. The La Lu community wishes you all a very happy holiday season!