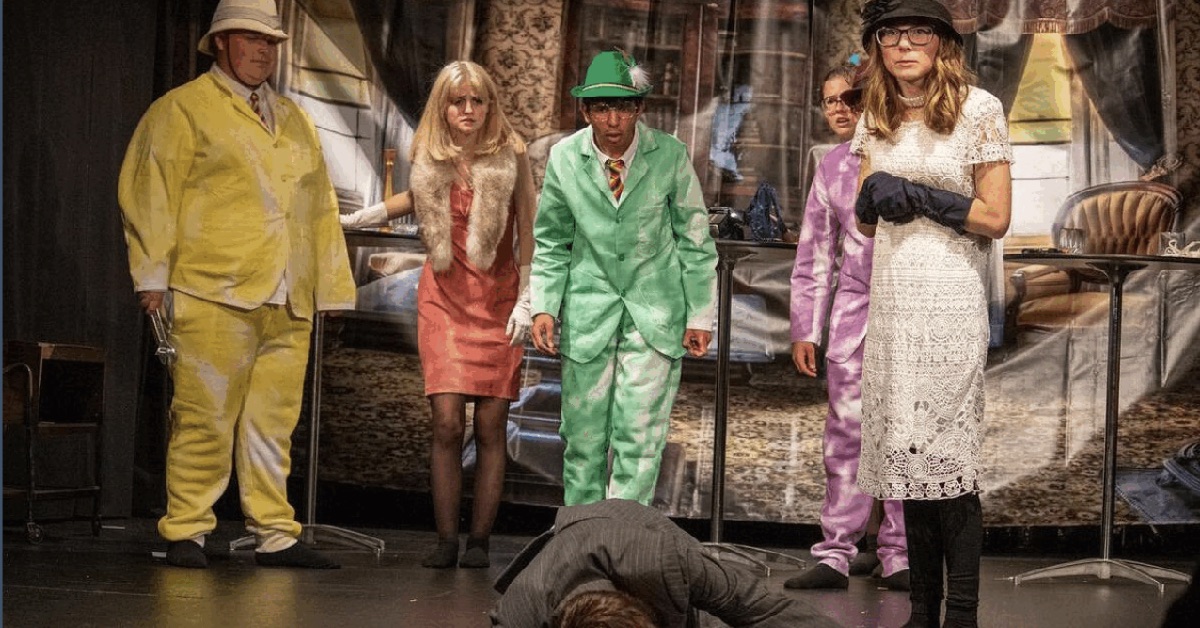 The month of October was exciting at La Lumiere. First up was Clue, a murder mystery play, performed by our very own La Lu Players. The cast did an incredible job, performing from Tuesday, October 4, to Thursday, October 6 with the FAB packed with families and students on the edge of their seats every night.

Spirit Week ran from Monday, October 24, to Friday, October 27. With themes such as Jersey Day and Dress Like Adam Sandler Day, La Lu students never fail to go above and beyond to create the best outfits. This year, participation would contribute to Head Cup points. The team with the most participants received four points for that particular day, and the team with the second most participants received three points, and so on. There were Heads Cup Games to go along with the themes. On Jersey Day, each team elected one person to compete in the Frozen Jersey Contest. Each participant is given a folded, frozen jersey and is tasked to put the jersey on. Competitors must smash all the ice off the jersey until they can put it on. On Dress Like Adam Sandler Day, there was Adam Sandler Movie Trivia held in the FAB.

At the end of the month, the official 2022 to 2023 La Lu Basketball Season commenced with Marsh Madness.

Marsh Madness is a tradition at La Lu to kick off the basketball and cheerleading seasons, similar to a pep rally. Varsity White, Varsity Blue, Varsity Girls, and the Cheerleading team are all highlighted that night.

Marsh Madness follows a similar pattern each year. First, each player is announced with their name, grade, and hometown as they parade through the crowd of fans. A variety of games are played throughout the night to showcase the teams and their hard work throughout summer and fall practices. From shooting contests, a fun take on musical chairs where players walk around a set of chairs set in the middle of the Marsh, when the music stops they must take a layup as fast as possible, and run back to the chairs, eliminating the slowest player, the games for Marsh Madness are both hilarious and eventful! The cheer team performs dances that they have been working on throughout the fall and even include all senior basketball players with an original dance that premiered at Marsh Madness.

The fan-favorite event of the night is probably the dunk contest. In the contest, students from each of the teams are chosen to show off their best and most creative dunks. There is a panel of judges who rate their dunks on a scale of one to ten, ten being the best. The competition is typically very close, but there is always one player who prevails as the best.

With speakers blasting music and the roars of the La Lu student section, Marsh Madness is an event everyone attends.

On the Thursday before Thanksgiving, a Thanksgiving Dinner is held in the Moore House where boarding students are invited to share a meal. A treasured tradition, Thanksgiving Dinner is a time to reflect on the first few amazing months of school, and an opportunity for international students to partake in a classic American holiday with their dormmates, who have become more like a family by this time of year.

Dr. Patti Pangborn joined the La Lumiere community in the fall of 2020, and it is safe to say that she made her mark on the school. Pangborn has a Ph.D. in English from the University of Louisiana at Lafayette, where she also taught college writing and literature courses.

Living on campus from the start of her career at La Lu, Pangborn was given the perfect opportunity to bond with students in the dorm and be able to get to know students in and out of the classroom.

Pangborn teaches sophomore Literature and Composition, as well as literature seminars for juniors and seniors, such as Women Writers and Speculative Fiction. She loves to hear her students' interpretations and takes on what they read. She encourages creativity, knowing that it will only help her students grow. Pangborn was even able to chaperone the Costa Rica trip during Spring Break last school year, allowing herself to enjoy warm weather while still teaching creative writing.

Dana Mulco is a senior and boarding student at La Lu. Born in Ukraine and raised in Moldova, Dana is an international student who was determined to study in the US since she was little. Falling in love with the school’s atmosphere and nature and meeting so many unique people, Dana knew that La Lu was the place she was meant to be.

“I never would have expected that in such a small community, I would find so many people that I immediately clicked with. Being a new international student, I was nervous about fitting in and whether or not I would be able to adjust, but I have become so close with students in different grades and teachers.”

She enjoys the teaching style at La Lu because of the small community. Small class sizes allow students to be heard, whether it is participating in a discussion, or asking a further question in a lecture.

She also has found that she has learned so many lessons on a nonacademic level. From talking to her dorm parent or a close teacher, Dana was able to take away life lessons from the wise faculty at La Lu.

She said, “I always thought that I would never be able to participate in so many extracurriculars because it was imperative to focus on my homework or studies, but La Lu gave me so many opportunities to take a break from school and branch out with new hobbies. I was able to try new sports like cross country and tennis and got to spend my Wednesday Elective volunteering at a local school, playing with children in a program called Big Buddies. These moments were fundamental to my high school experience and are something that I will always cherish.”