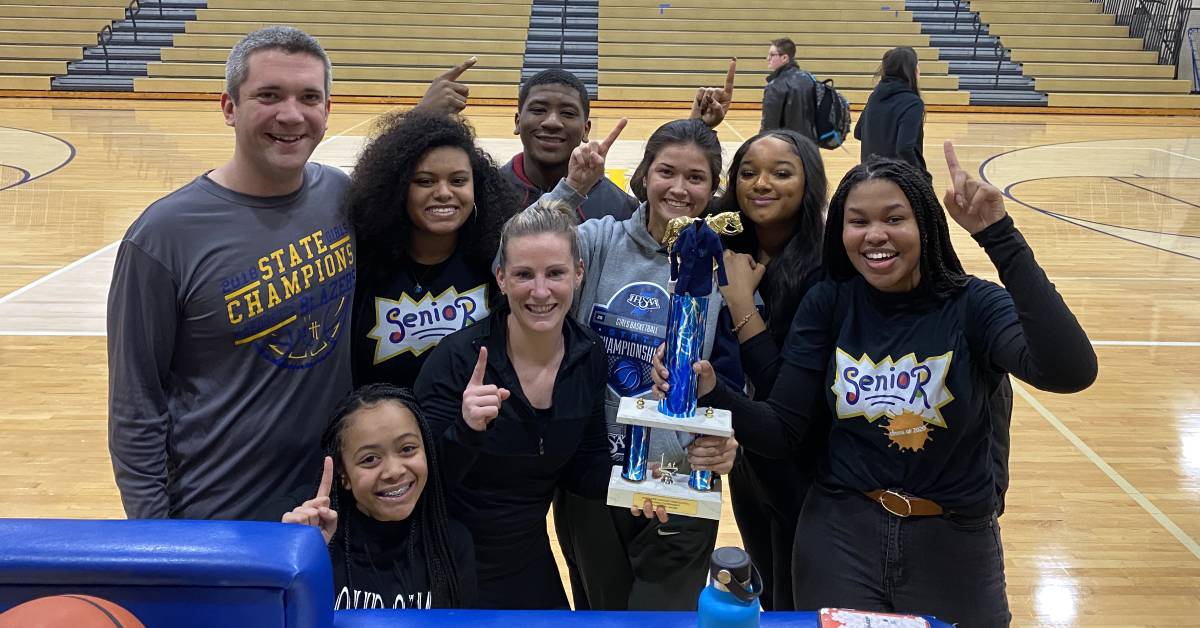 Marquette Catholic High School celebrated Catholic Schools Week during the last week of January along with other Catholic high schools and middle schools across the nation. The student body kicked off the festivities on Sunday, January 26, by decorating the class hallways with themes such as galaxy (freshmen), Hawaii (sophomores), jungle (juniors), and Nickelodeon (seniors). Students enjoyed shortened periods, dressed-down days, and daily activities such as a talent show or teacher trivia to help promote school spirit.

A favorite of the staff was the All Schools’ Mass officiated by Father Kevin of St. Mary of the Immaculate Conception Parish. Marquette celebrated with Catholic middle schools within the Diocese of Gary. The service was held in the gym of the Marquette School Center.

The Marquette student body was fired up for the class v. class basketball games on Friday. The senior team, reigning champions over the other classes, battled the teacher team. Though the seniors won the coveted ‘Blazer’ award among the students, the team of teachers earned bragging rights from the whole school based on the final game.

“It’s been great to see students and staff connect. It really shows that we can all accept new and different people when we have a common goal,” said Amanda Boyd, staff member and organizer of spirit week.

The National Honor Society at Marquette has also played its part in the school community over the last month. Orchestrated by sponsor Tracy Wagner, National Honor Society members volunteered with the American Red Cross on January 28 to host a blood drive at Marquette. According to the Red Cross staff on site, 32 units were collected in total from Marquette students, family, and friends.

Aside from this life-saving contribution, the National Honor Society hosted an Induction Ceremony for incoming members on February 5. According to Brad Collignon, the Chapter inducted 20 sophomores, three juniors, and two seniors to help the current members continue to reinforce the values of academics, character, leadership, and service.

Marquette Catholic High School rang in the new year with school spirit, both in fun and fraternity, and the staff and students aim to continue this enthusiasm through the end of the second semester.

After only three short years teaching at Marquette, Amanda Boyd, social studies teacher, has made quite the impact on her students. While at Marquette, she has taught subjects such as geography, history of the world, college-level economics, and U.S. government. Outside of the classroom, she has facilitated student government events such as school dances and Catholic Schools Week activities. The opportunity she has given her students to take on these responsibilities has pushed them to develop skills in leadership, organization, and communication.

“It’s a lot of work, but I get to see different sides of the kids, see them take on responsibility, and be as supportive as possible,” Boyd said.

Boyd graduated from Indiana University Northwest with a master’s degree in secondary education. She worked at other schools in the area, as well as held positions in management, but she was attracted to Marquette for the unique environment.

“It was the one school where I was greeted and acknowledged. The students were — and still are — so gracious and polite. Also, the hospitality and professionalism from the staff was really attractive,” Boyd said.

Since then, she has become a key part of that gracious and hospitable atmosphere.

“The best part of teaching is the relationship you build with the students. You want them to succeed, you watch out for them, and you always want the best for them,” she said.

Boyd has enjoyed helping to make the next generation, in her words, “good humans.”

Mason Hervey’s involvement in the school is scattered in every conceivable area. He participates in theatre, cross country, and volunteering with Reins of Life, a therapeutic equestrian program for children with special needs. In his three years at Marquette, Hervey has also been part of the environmental club and the art club. This widespread involvement provides him with both fun extracurriculars and strong friendships.

Hervey’s favorite subject is the Rosetta Stone language lab because it allows him to work at his own pace.

“I don’t like feeling rushed when studying. I like being able to complete my work when I have the time to,” said Hervey.

He is able to learn to manage his time while fully submerging himself in his education. This quality is one of the many reasons why students at Marquette enjoy the language lab so much.

Hervey plans to attend college or trade school to study business. He said that Marquette’s dual credit classes have set him on a direct path toward this plan with both the academic material and collaboration involved.

“It’s taught me how to communicate with different people. It has also prepared me for the course load I’ll have in college.”

Hervey’s involvement in extracurriculars and academics has made him an exceptional example of what being a Blazer is all about.

The boys basketball team will celebrate its senior night at 7:00 p.m. on January 13. It will be honoring varsity players Jake Tarnow and Vaunte Johnson, who will graduate in the spring. Additionally, Marquette will be honoring senior cheerleaders Naya Blakely, Myah Jackson, Kennedy Lynn, and Ann Peterson. The varsity game will begin after the senior acknowledgments.