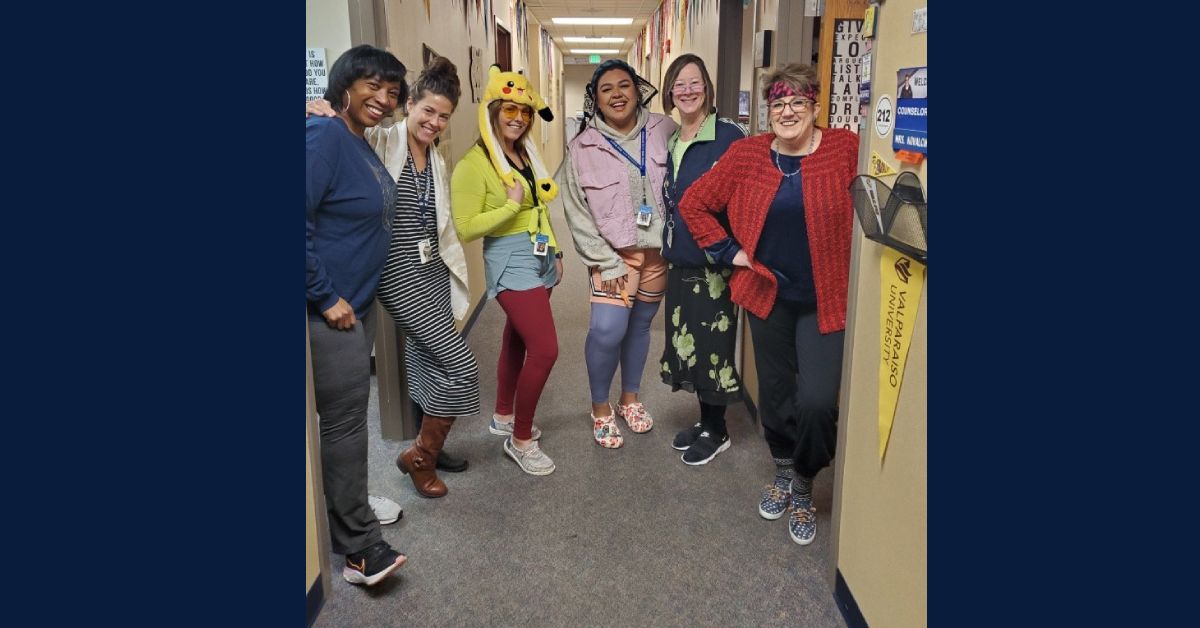 Coming back from Winter Break, the Michigan City High School (MCHS) Wolves are filled with cheer and excitement about what’s to come in the second semester of school.

Competition is healthy and always prevalent at MCHS. After returning from the three-day break on January 16 due to Martin Luther King Jr. Day, the MCHS spirit week began. With fun and wacky themes from pajama day to fashion disaster to jersey day, the week ended with students wearing school or class spirit wear.

On that school day, there was a pep rally to excite the students and staff for the upcoming and exciting games.

The student section at MCHS came through in supporting the basketball teams. From beach balls flying around to the tropical theme in the Wolves Den to the cookies they received from the cheerleaders and the pizza they received from Athletic Director Craig Shaman, the night was full of fun and hope.

The game was close, with the Wolves having a home-court advantage and about a 15-point lead, but in the last quarter, the La Porte Slicers came back and beat the Wolves by three points. The end game score was 73-76.

Despite this unfortunate loss, the Wolves are more excited than ever to come back next year and defeat the Slicers on their turf.

Having just come back from break, the MCHS students and staff are more focused than ever. There’s much to prepare for academically with the end of the year approaching slowly but surely.

One exciting event that's coming up is the MCHS Winter Formal. On January 28, the Winter Formal will be held at Orak Shrine with free food and plenty of dancing.

Many of the winter sports are coming to a close, which means that the spring sports like baseball, softball, track, and tennis will begin training and conditioning for their seasons.

On February 4, the MCHS band will be holding a mattress fundraiser. The fundraiser will support the band, and Michigan City Area School (MCAS) employees will receive a 10% discount.

Many students don’t realize the stories behind teachers that lead them to the profession. Mark Marz, the chemistry and AP Physics teacher at MCHS had an interesting story about how he became a teacher.

As a high school student, Marz was dedicated to his studies and future. By saving a lot of money, he was able to pay for a lot of colleges. He attended Indiana University South Bend (IUSB) for three semesters, then graduated from Purdue University with a bachelor of science in chemistry.

After that, Marz went to Indiana University (IU) Bloomington for a semester, working on his Ph.D. in organic synthesis, a process in which you build drugs that could hopefully cure cancer. After two semesters, he decided he wanted to pursue a career in education.

Marz has now been teaching for quite some time, and he has been able to see the difference in trends and how students have changed throughout the years.

“When I first started, it seemed like the students were more in charge of their education. Nowadays, teachers have to make sure the students do what they’re supposed to do. There's more of a responsibility on the teacher than there is on the students,” said Marz.

Marz loves being able to help his students. Science classes are typically the most difficult and rigorous classes; he understands this and makes it a goal to help all of his students understand the material.

Along with teaching, Marz is the Fishing Club and Science Club sponsor at MCHS. So far this year, the Fishing Club has been on three outings. Coming up on the first weekend in May, the club will compete in the Hoosier Coho Classic, which will consist of two full days of fishing on a charter boat.

“I like seeing kids catch their fish. One time we had a girl who had never caught a fish before, and she caught her first fish in Trail Creek near Krueger. It was like an eight-pound steelhead. It was a huge fish. It was awesome,” said Marz.

Aside from Marz’s passion for fishing and teaching, he has a rather abnormal hobby: beekeeping. He currently has seven or eight hives which can be lots of work. The students are grateful for his hard work, and he even sells the honey he collects to students.

Yearbooks hold memories, from the faces of classmates that you might not recognize to Friday night sports games, to some of the most fun times in your high school career. Upon receiving your fresh yearbook, you gawk at the lively photos and events that occurred in the past year, but who puts all these memories into a book you can carry around?

At MCHS, the Alpha Yearbook staff is responsible for the curation of the entire yearbook. Abby Bartlett, a junior co-editor and sports editor on the yearbook staff, has been at this for two years now and plays a huge role in ensuring that the yearbook is complete and up to standard.

Bartlett first took Yearbook her sophomore year. At this time, she was co-business editor and helped wherever else she was able to. Much of her interest in the class sprung from her older sister and Bartlett’s interest in photography.

“I was introduced to the yearbook through my sister, Charlotte, who joined the yearbook when she was a sophomore and told me how much she liked it. I wanted to give it a try. I also like taking pictures and capturing fun moments I would want to remember,” said Bartlett.

After receiving such high regard and demonstrating the hard work that goes into the yearbook during her sophomore year, Bartlett was asked to be co-editor and sports editor her junior year. This was a major accomplishment on Bartlett's part, but it came with a lot more responsibilities than she had in her sophomore year.

“A major difference is the responsibility I now carry is having to deal with the busy work that no one notices: making sure sporting games are covered by others in the yearbook to take pictures, making sure everyone is staying on task, and going through all the spreads to make sure everyone participating in a sport is tagged in the picture on the page,” said Bartlett.

Despite the long hours that the yearbook takes and the dedication that goes into it, it can be one of the most fun and exciting classes to be a part of.

“This class is different from my other classes because it is very engaging and close-knit. Getting to go around the school and take pictures of the diverse classes and activities going on gives you a glimpse of what you usually don’t get to see in a normal class,” said Bartlett.

With the rigor of yearbook class and the workload from her other classes, it’s easy to get burnt out and exhausted from the work of junior year. Bartlett understands that all of this is for her future, and the hard work she does now will make the future easier. Managing time is the hardest part, so by staying on top of her work, she is better able to get everything done.

“I enjoy sports the most and the close bonds I have made. Also, going to sporting events such as basketball games and football games with a big student section is what I look forward to throughout the year,” said Bartlett.

Taking on and trying new things like clubs, sports, and even different classes, can be scary, but by trying these new things, you may just find what you're passionate about or be a huge success like Bartlett.