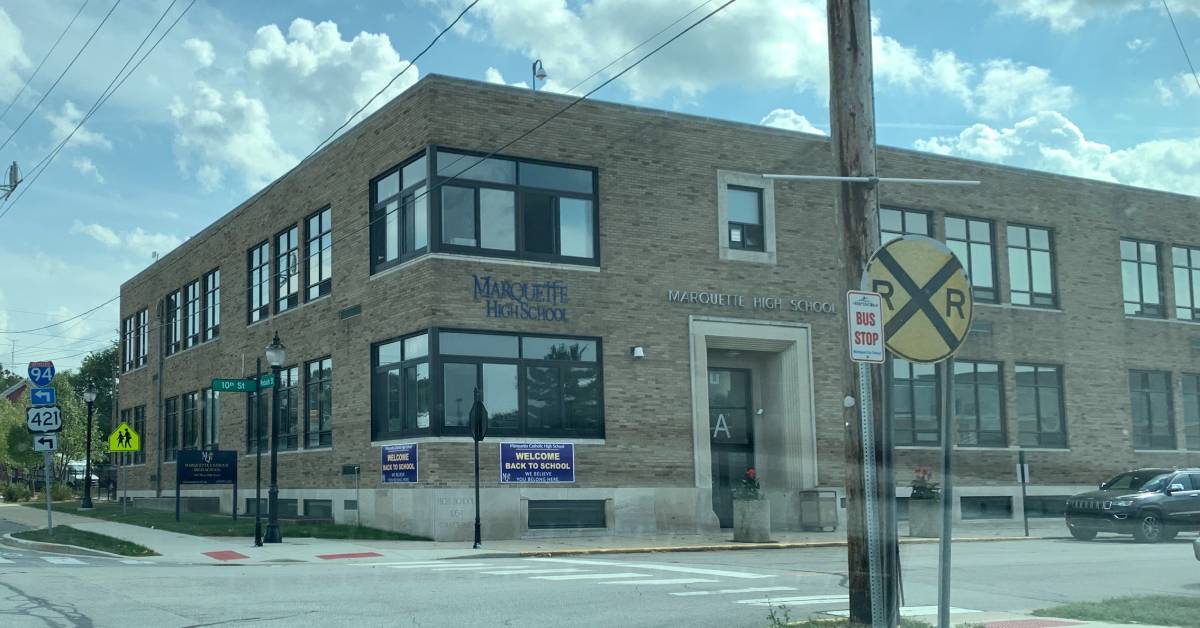 The National Honors Society of Marquette held its first meeting on September 3, hosted by sponsor Tracy Wagner to discuss the upcoming Blood Drive on September 20, the peer-tutoring program, and volunteering expectations. Student Government at Marquette also hosted its call-out meeting for prospective leaders and committee members for school events.

Fall athletes have gotten back to competing, and with several great starts. boys varsity cross-country began its season with senior Jake Tarnow taking first place at the New Buffalo Invitational, and the team earned sixth overall. Girls varsity volleyball also started off on a great note with a 3-2 record.

The international program at Marquette has been as active as ever. Enrolled international students come from Guatemala, Spain, and as far as South Korea and China. These students make up about 10 percent of Marquette’s student body. In addition to international students, there are currently 12 students visiting from Málaga, Spain. The dozen arrived on September 4 and will stay until September 25. They live with Marquette families, which allows them to immerse into American culture—particularly the unique culture of Northwest Indiana, with the perks of being near Chicago while still having the peace of the Midwest.

Marquette’s 2019-2020 school year has already shown much promise in the way of student life through clubs, sports, and the international program.

Tracy Wagner is one of Marquette’s two-person advising team, next to Mary Kay Mark, from whom she learned everything she knows. The road that led her to Marquette was far from straight, she said. She attended La Porte High School, then received a General Studies Degree with a minor in history at Indiana University Bloomington. She had actually been on track for a degree in education but decided to change majors to join the workforce as soon as possible.

From college, she worked at various office jobs, such as insurance, but heard of an open position at Marquette that needed to be filled: an Academic Advisor. Her mother Jan Wagner is an alumnus of Marquette Catholic High School and had been working in the office for several years when Tracy Wagner interviewed. The fit was perfect, and it was obvious that Wagner was excited and qualified to work with high school students.

She has been working at Marquette for five years now and has continued to grow in her position. She said the biggest challenge of her job is preparing kids for life beyond high school and she overcomes this every day by “being transparent and open, honest and available,” she said.

She praised Marquette’s smallness because it allows her to have such solid relationships with the students she advises. The beginning of the year is always daunting. The advisors spent many early mornings and late nights working to assure new and old students that the anxiety will settle and that they will find a family at Marquette.

With the introduction of the University Program, which ensures select high school students an Associates Degree along with their high school diploma, the advisors work double-duty to qualify the University students for the duel credits they will earn. At Marquette, a major focus for her underclassmen is helping them to “identify themselves as a Blazer.” After joining clubs, meeting classmates, or attending a few games, new students find their place in the community pretty quickly. Her favorite part of the year is graduation, she joked, but she elaborated on a more serious note: the payoff of seeing the results of their hard work.

“Students are proud, families are excited,” she said. “It’s a fresh start for them.”

Sydni Thomas is one of the most involved students in the senior class. She is involved in the Environmental, Global Fellowship, and Safety Clubs. She is a National Honors Society Member, and a varsity athlete for soccer and tennis. Thomas’ involvement in the community reaches past Marquette, too. She has earned the Points of Light Award for two years in a row due to her exemplary involvement in community service, a passion of hers which shows itself in her active participation in school-offered service retreats. She said that helping to lead a service retreat for the first time last year and giving the opportunity to serve to others made her “heart feel happy.”

“My favorite thing about Marquette is the opportunity and freedom to complete community service,” Thomas said.

In conjunction with guiding the underclassmen through service, she is also friends with a lot of them, as the graduating class, last year was with her. Thomas said paying it forward to help, advise, and befriend the younger high schoolers, puts a smile on her face.

Of course, senior year is not without its challenges.

“The hardest part is having an idea of what I want to do, but having to put in the extra work to get there,” she said.

But she knows it’s worth it.

“Applying to colleges and receiving acceptances, seeing that my hard work has paid off is a really good feeling,” Thomas said.

Thomas is headed to college to pursue a degree in Civil Engineering or Computer Engineering. Her advice for underclassmen is start applying to colleges early.

“My advice to my fellow students is to check up on each other, even and especially without reason,” she said. “Because a student body is in it together.”

Auditions for Marquette Theatre’s “A Night of One Acts” will take place during the last week of September. This production will feature two students each directing hand-picked, one-act plays. They will be showing in early November, lending the cast, crew, and student directors plenty of time to build their shows from the ground up for the Marquette audience.