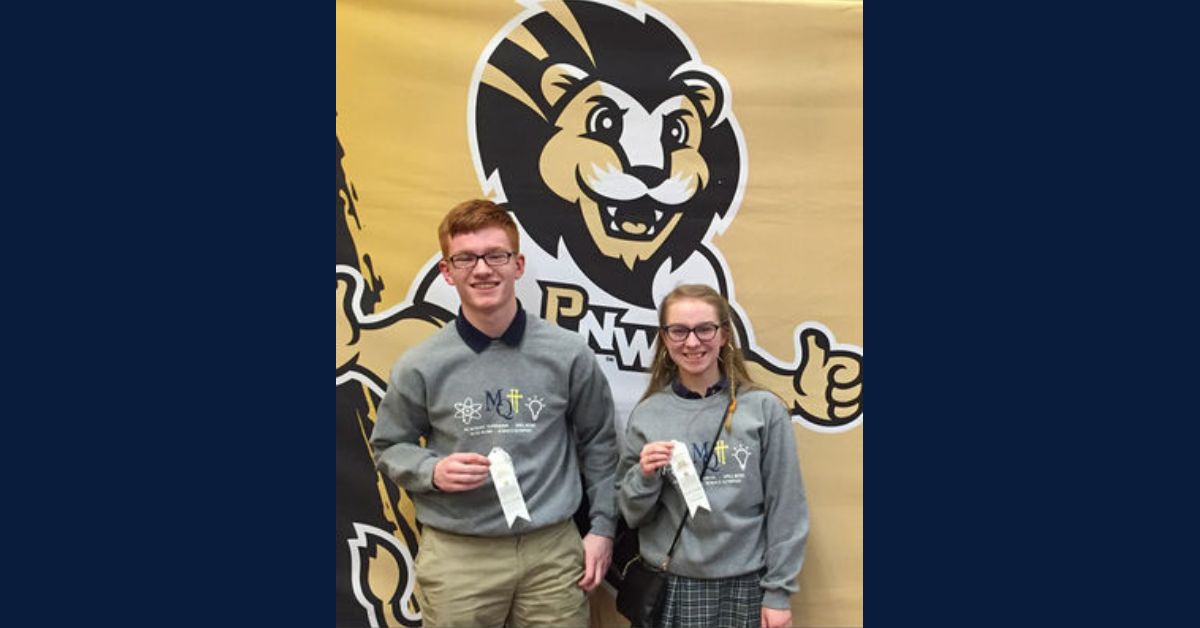 In the early 2000s, Marquette Catholic High School had a head-turning Academic Super Bowl and Quiz Bowl team. They had a large group of kids, who won or made it to the finals year after year. The team won the state championship in the math round in 2004 and the interdisciplinary round in 2005.

However, after a few years, each member of the team graduated, leaving a smaller and smaller team until there was no one left for the Academic Super Bowl team. The Quiz Bowl team had shrunk tremendously, too, but there were just enough kids to continue having a team. A few years later, when the class of 2021 students at Marquette were freshmen, the Quiz Bowl team had a few seniors and two freshmen, Aidan Bartnicki and Eleanor Williams.

The next year, those freshmen convinced their friends to join, forming a team substantial enough to play. In their sophomore year, they also decided to restart the Academic Super Bowl. The team was small, but they did not let that stop them. That year a few of the students placed at the invitational in two categories. From there, both teams have continuing to increase membership and bring glory to Marquette’s name.

They answer all the questions with their coaches as moderators, then compare the results with the competing school to see who won. This year the team had a new record winning streak of five matches in a row. They finished off their season in the area competition, which consisted of a large Zoom call involving most of the schools in Northwest Indiana.

Last year, the Academic Super Bowl team competed in the virtual state championship and had a few wins in three of the categories. Academic Super Bowl season has just started up again, and they are working hard in hopes of winning again this year. The team now has 19 members, who will carry on the team for years to come. Being on the team brought them wins and a good college resume as well as a sense of belonging, friendship, and eagerness to learn.

“I love the format of Academic Super Bowl, the team concept. They are seated at a table with time to think, discuss, and select an answer. I think competitions are more fun when you get to collaborate like that,” said Wadle.

Wadle started teaching at Marquette four and a half years ago. During his childhood, he loved watching Jeopardy and participated in MATHCOUNTS during his middle school years.

“Having the opportunity to mentor students who love to learn and enjoy learning outside of class time is a treat for me,” said Wadle.

Wadle also coaches in the Scholastic Bowl in Illinois. His favorite thing about Marquette Catholic is having the chance to connect with teachers and students on both a spiritual and academic level.

Senior Aidan Bartnicki is very involved academically and in sports. In addition to participating in Academic Super Bowl and Quiz Bowl, he participates in Distributive Education Clubs of America (DECA), soccer, and golf.

Bartnicki’s favorite class he has taken during his high school years is Mystery Fiction. Bartnicki has been involved in Quiz Bowl since his freshman year and Academic Super Bowl since it was restarted during his sophomore year.

His favorite thing about going to school at Marquette Catholic is that you can participate in more than one extracurricular activity, unlike at bigger schools where you have to have one main focus.

“At Marquette, you can participate in whatever you wish, which lets us become well-rounded individuals,” said Bartnicki.

“My favorite aspect of the Academic Super Bowl is the teamwork. We are able to collaborate and come up with the answers together,” said Bartnicki.

Bartnicki concluded by saying that he would recommend joining the Academic Super Bowl team to incoming freshmen because it is fun and looks great in college applications.