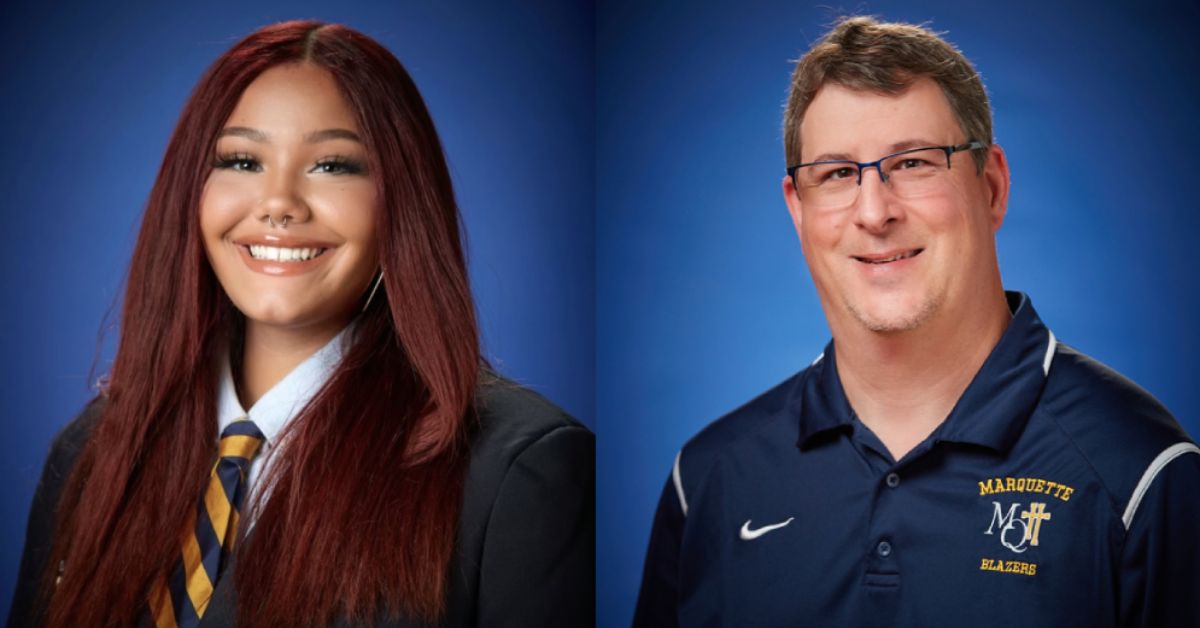 Marquette Catholic High School’s Performing Arts put on its fall plays on November 11, 12, and 13  in the Rudy Hart Theatre. The production, “An Evening of One Acts,” included three short plays: “Cut,” “A Game,” and “Paper or Plastic.”

The three plays allowed for many new faces to get chances at important roles following the graduation of a senior-heavy group last year. Other new faces were present in the production of the plays, with Math Teacher Eric Edson directing “Cut.” The other two plays were directed by seasoned veterans Amy Crane and Anthony Holt.

These plays casted many students new to the acting side of theater, save for a few returning seniors. “A Game” starred senior Mario “Paolo” Castillo. The first play, “Cut,” featured Catarina “Nina” David Ferreira, an international student from Brazil who is new to the program along with a triumvirate of Maya Ruiz, Telle Skish , and Sedona Vendramin. The last performance, “Paper or Plastic,” was led by Ally Heinrich, who is new to acting.

The three plays were a huge success, seeing a big turn out on all days and many people talking about which was the best in the following days.

The Quiz Bowl team just had its first competition. The academic competition teams are seeing high participation this year, giving them high hopes and good prospects.

The Science Olympiad is also getting its start with its first competition to likely come in January, alongside other big opportunities that are only seen every couple years at Marquette Catholic.

There are many new competitions that have students interested:  bridge building, astronomy, flight, forestry, and, what Science Olympiad competitors seem to be most excited for, Mission Possible.

The new events mixed with returning favorites have students excited to try their luck against the other participants. Teachers and coaches are optimistic for many success stories to come from our hopeful teams.

Matt Zima is a teacher who has been in the science and athletics department at Marquette for six years. He has coached the Girls Volleyball team and Science Olympiad amongst taking up other roles at the school in his busy life. Zima—a caring man for his students, coworkers, and family—has been taking care of his mother for many years, shows up to many of the students’ sporting events to support them, and helps integrate new teachers into the school.

An exciting event coming up for Zima is the Science Olympiad, of which he has coached for all six years of his Marquette career. Before coming to Marquette, Zima had also coached the East Chicago Middle School team for three years, and prior to that he assisted in helping the Hanover Central team.

While only having two returning players, a handful of upperclassmen, and a new secondary coach, Zima holds high prospects in the competitions to come this winter. An underdog story is something that Zima is no stranger to, having pulled off what seemed like the impossible in years prior, punching well above his weight. He is excited for the new season, seeing it as a chance for success in whatever competitions they land.

Tatyanna Sellers is a senior at Marquette Catholic. Sellers is one of several upperclassmen who has decided to join the Science Olympiad team for the first time.

“I decided to join the Science Olympiad team because this is my last year of high school, and I wanted to fully enjoy my senior year,” said Sellers.

Sellers will be participating in the astronomy, anatomy, physiology, and the “write it and do it” events. Sellers enjoys hands-on activities and has been interested in science since she was young. This interest sparked a passion for paleontology and an excitement for how much there is to learn and discover in the universe.

Sellers has enjoyed her high school experience at Marquette Catholic.

“I’ve enjoyed the environment I created for myself with loving friends and caring teachers in high school,” she said.