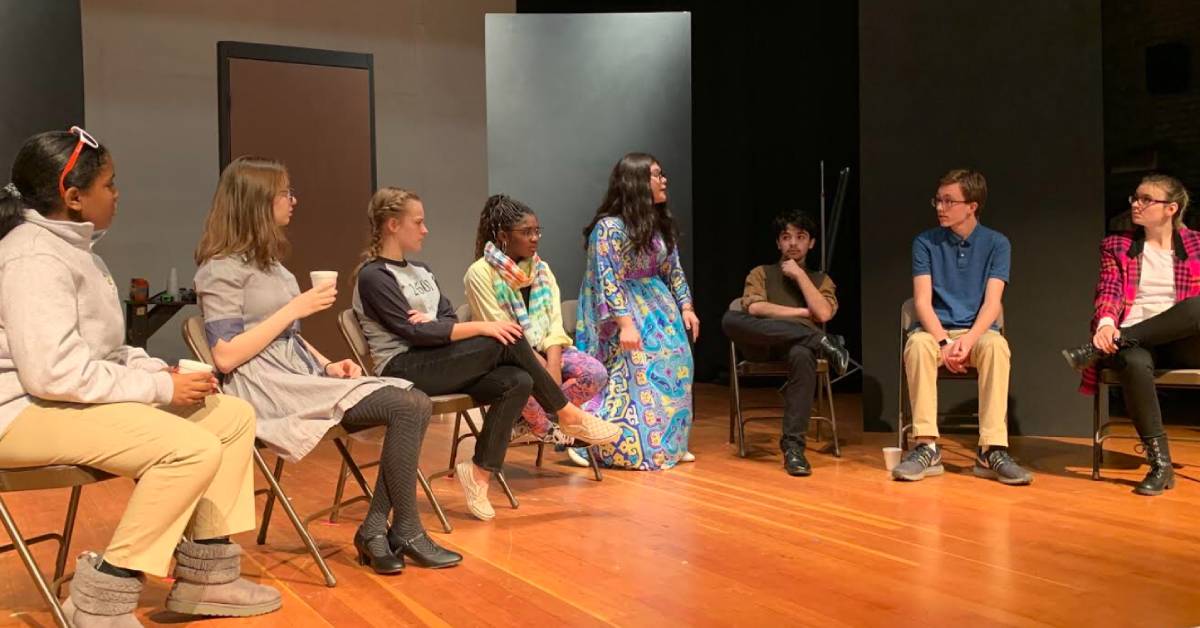 Casey Martin, Marquette Catholic High School social studies department teacher and coach for Blazer Baseball, wanted a way for the Marquette community to donate to a cause that would benefit American veterans. He designed a baseball cap for sale with Marquette’s logo filled in with the American flag. At first, he was worried that participation would be low, but at the very least, the Marquette baseball team and their families would purchase and wear them for the upcoming season. Opening the sale to the student body and community, he thought, would guarantee a few more sales, but the response surpassed his expectations with more than 150 hats sold and countless additional donations.

“The proceeds will be donated to Folds of Honor, an organization that, since 2007, has carried forth this singular, noble mission: to provide educational scholarships to spouses and children of America’s fallen and disabled service members. Since education and college preparation are essential to what we do here at Marquette, it was really a perfect fit. I can’t think of a more worthy cause,” Martin said.

On Veteran’s Day, the social studies department dedicated a plaque to Marquette alumni that have served and presented the donation check to Folds of Honor.

As a teenager attending Elston High School, Amy Crane always promised her Marquette friends that when she was older, she would create a steady drama department like the one she enjoyed at Elston. During her time at the University of Indianapolis, she began studying education, but switched majors and graduated with a degree in theatre, a concentration in directing, and a minor in communications. Despite the major change, she received a call from the then-principal of Marquette, Pat Cannon, who wanted to start a drama department. Crane was hired without a teaching degree and earned one between teaching her different classes. She was finally fulfilling her teenage dream of creating a steady drama department.

She has taught a vast array of classes through her years at Marquette: theology, speech, college prep, chorus, band, and technical and artistic theatre. The Drama Department was “very inconsistent” when she first came to Marquette. Every now and then, a volunteer director would put on a show or students would get together and request to put a show on.

“There was no department, no classes… from the 1950s to the 1970s, the department was huge. It has a rich history, but it just fell off for a while,” Crane said.

Revamping the drama department was a massive undertaking that she could only approach one step at a time, and through the help of many, many hands.

“My theatre friends have their hands all over this theatre,” she said.

Through the years, the department has steadily grown to fill three different storage areas to the brim.

Crane’s favorite thing about Marquette is how people are so individualistic. From first-day freshman to veteran teachers, the community at Marquette shares common goals in faith and education. “But everyone has unique gifts they can bring to the table that allow them to shine,” Crane said.

Marquette’s small size gives people the chance to stand out, and not to be a simple statistic. Her favorite thing about Marquette Drama is bringing joy. Reflecting on the 200 productions she has been a part of throughout her life, she said, “I just love the things theatre inspires in people, in the audience or on stage. It can be life-changing.”

Crane’s 20-year streak in Marquette’s Drama Department goes to show how many kids have made a home within the theatre.

Caitie Gately, a senior, is a prominent figure in the Marquette drama department.

“The very first day of school, we walked through the auditorium doors and I looked at everything and thought, ‘that’s what I want to do,’” Gately said.

She quickly became a stagehand and began to learn about the technical side of theatre.

“That first show got me hooked,” Gately said. “I enjoyed holding a leadership position, and I do well when I get a group together to collaborate, and we make something work.”

“I had to give hurried pep talks to convince actors that they could, in fact, still act,” she said. “It was so exciting to see the actors ready to go on and do what they love.”

This year, department head Amy Crane asked Gately to direct a one-act play on her own. A one-act play is a shorter performance with a slightly smaller cast. Marquette would be featuring two one-act plays in “A Night of One-Acts” directed solely by two student directors.

“I was not expecting to be asked, and it totally blindsided me,” Gately said. It would be a challenge, but Crane expressed that she believed Gately was capable of handling the load.

“Directing has shown me how to open up and have fun with the process,” Gately said.

Gately will be furthering her education in-state. She is planning on double-majoring in mathematics and biology and minoring in theatre production. She hopes to then attend medical school to study pathology. She aims to deepen her knowledge while helping the public.

On Marquette, Gately said, “I don’t know if I have an all-time favorite memory. Marquette’s given me a lot of good ones. It’s a place I’ll always love, but at the same time, I can’t wait to move on to the next great thing.”

Marquette will be showing two one-act plays directed by two senior students. “A Night of One Acts” will show ‘Who Am I This Time?’ and ‘Whodunit?’

‘Who Am I This Time?’ is written by Kurt Vonnegut and directed by Caitie Gately. The romance surrounds the story of two very boring people who take on the full depth of and essentially become the characters they portray. They consequently fall in love with each other by the time the show-within-a-show comes to a close.

‘Whodunit?’ is written by Anne Coulter Martens and directed by Zoe Olesker. The comedic murder-mystery makes a mockery of the crime genre. As a farce, the family and detectives are overdone, guaranteeing laughs from start to curtain call.