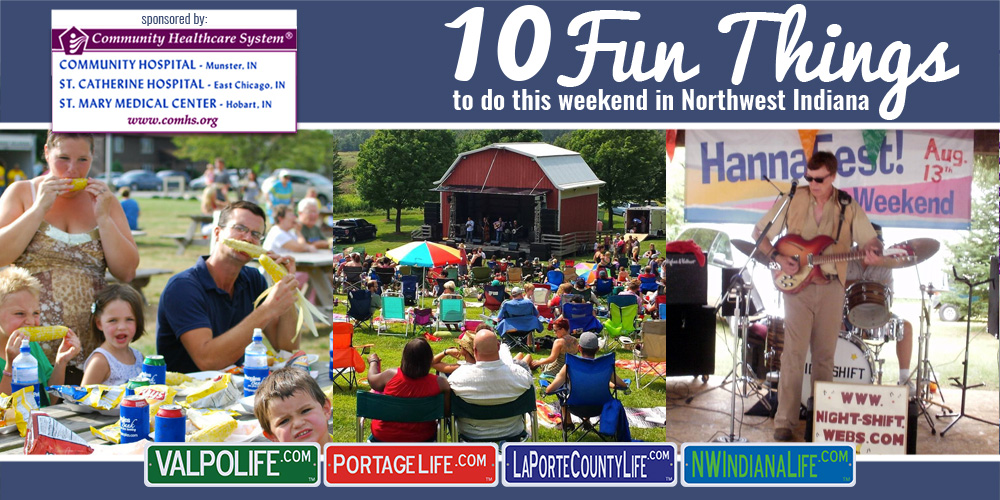 Let’s get ready to party! Wow, what a fun list of activities to join into this weekend. Either pick one and camp out at or jump around throughout the area to fit them all in! There is the Duneland Chamber Party in the Park, St. John’s Chamber Annual Corn Roast, and Hannafest! Spend the Saturday biking, then head to another live music show at the Prairie Magic Music Festival or the Valpo YMCA’s Battle of the Bands. Show off your car, watch some jet ski racers zoom across the Whiting beach front, or party for a great cause at the Salvation Army’s Block Party! These events are great ways to end the summer and kick-off the school year!

St. John Chamber 14th Annual Community Corn Roast
Corn and more corn! Enjoy food, activities, beverages and different, delicious ways to eat corn at the 14th annual corn roast. Stop by at one of the vendor booths, or sign up now to become a vendor!

Hannafest
The little town of Hanna is making big plans to entertain both young and old at the annual community festival! Join the town’s community with games, a magic show, food, dancing and music and so much more!

AquaX Jet Ski Races
Head to the lakefront this weekend for extreme Jet Ski racing! AquaX Jet Ski Racers will return to Whiting and Chicago for the 2nd Annual Great Lakes Jet Ski Series. The Whiting portion of the series will take place on Saturday and Sunday from 10 a.m. - 4 p.m.

2nd Annual Prairie Magic Music Festival
Porter County Parks & Recreation would like to invite visitors to the Prairie Magic Music Festival, a celebration of rock, blues, folk and Americana music set right in the heart of beautiful Sunset Hill Farm County Park. This festival features a dynamite line up including local acts the The Planetary Blues Band, The Crawpuppies, Foster Ross & Young, and the Blues Project, as well as Chicago favorites the Nicholas Tremulis Orchestra. There will also be beer and food vendors, Valpo Velvet Ice Cream, and much more!

Valpo YMCA and Campus Life Battle of the Bands
Head out to listen to some great, family-friendly bands. Five local high school bands battle together for a prize, plus the band Sevenglory will headline the night afterwards!

Portage Township Live Entertainment Presents Bryan Lubeck
Internationally-acclaimed, award-winning guitarist Bryan Lubeck with his band will be performing this Sunday! An editor with Billboard magazine once said that Bryan Lubeck weaves a tapestry of fiery Spanish Guitar and cool Urban Grooves into exhilarating and romantic live shows and recordings.

Salvation Army 4th Annual Community Block Party
Everyone is invited to come for free food, games, music and friendship! We will have cotton candy, snow cones and Domino's Pizza. Some firefighters with the Michigan City Fire Department have offered to grill up some hot dogs!